On Monday, November 14th, by unanimous vote the Borough Council and Mayor officially renamed the alley that connects McMillen Street and Chartiers Street as Weise Way.

“WHEREAS, Mary Weise, a lifelong resident of the Borough of Bridgeville, was elected by her fellow citizens to serve for some twenty years on Bridgeville Borough Council, her decades of honorable and faithful service in public office spanning eight years from 1986-1993, including two years as Council President, and for an additional twelve years from 2002-2013;

WHEREAS, Mary Weise was not only instrumental in the 1999 formation of the Bridgeville Area Historical Society, where she has displayed over two decades of loyal and dedicated service as its Board President, but she continues to serve as its tireless leader, overseeing day-to-day operations, hosting its ever popular and fascinating speaker programs, assisting her fellow members in collecting, compiling, and displaying priceless artifacts and photos of Bridgeville’s history, and remaining as a driving force in its mission to uncover, discover, preserve and keep alive the unique and rich history of the families, residents, and local businesses who came together to build and maintain the Borough of Bridgeville and its surrounds as the vibrant and tight-knit Neighborhood and Community that it remains today;

WHEREAS, from her earliest days as a little girl attending kindergarten at the Women’s Club, to serving ice cream and cleaning up at Weise’s grocery store, or hanging around with her uncle at the blacksmith shop, through her ongoing tireless leadership as President of Bridgeville Area Historical Society, Mary Weise has never ceased in her quest to observe, record, and memorialize the living history of Bridgeville that Mary embodies and continues to regale and share with her fellow friends and citizens;

WHEREAS, Borough Council and the Honorable Mayor of the Borough of Bridgeville, wish, by this small token of appreciation, to express ours and the entire Community’s heartfelt gratitude for Mary’s life-long loyal and dedicated service to, and love for, the Borough of Bridgeville, for her long and continuing leadership displayed throughout her many roles serving the community, and for the inspirational example and high bar that she continues to set for herself and fellow residents alike;

That the Borough of Bridgeville public street currently known as an “Unnamed Alley” located between and connecting McMillen Street and Chartiers Street, be and hereby is officially and formally designated as, named as, and henceforth into perpetuity shall be known as Weise Way.”

Photo is Mary Weise being presented by Borough Council and Mayor with a copy of the Ordinance and new Street Name Sign. 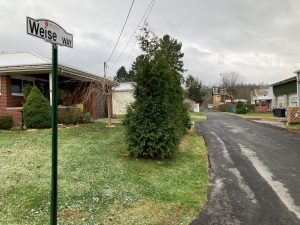 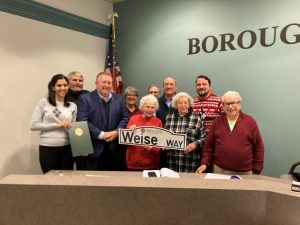